2015 was a good year for Foreach. We are grateful for the appreciation we received from our customers and for the chance to work on so many challenging and meaningful projects. We are proud of our talented teams and thankful for their display of enthusiasm and persistence during the year. When we were at our best, we have worked together intensively with our customers and delivered outstanding web products. We are very ambitious for 2016, the year that marks our tenth anniversary.

In May 2015 we decided to develop a large platform for a well-respected pharmaceutical customer in Drupal 8. This version of the open source CMS was not yet released at the time. The project, representing several hundreds man-days of work, challenged the team and brought great learning. The result will be released early in 2016.

In September we launched knooppunt.net, a gateway to the teaching materials of 6 publishing houses. The platform is used by hundreds of thousands of teachers and pupils in Belgium, as part of their in-class activities and for additional practice at home. The product is built on a SOA with a JAVA Across back-end and Drupal front sites.

We also realised several mobile optimised projects during the year. We don’t do native apps, but most of the new sites we’ve delivered in 2015 are responsive. On top of that, we delivered a mobile front end for resto.be, using Java Across, Spring Mobile and Thymeleaf. For De Tijd and L’Echo we’ve delivered a new m site and back-end systems serving new mobile apps.

We did many more projects for customers during the year, but meanwhile our own project of renovating our office building made good progress as well. Most remarkable was the transformation of our concrete garden into a hip terrace with wooden benches and greens. The objective is to improve our offices step by step to accommodate more colleagues and to make it a more convenient place. Next up is giving one of our meeting rooms a make-over and transforming it into 2 smaller ones.

2015 was also marked by a real baby boom. In the span of the year the number of “Foreach babies” grew dramatically and as a result we hosted our first St. Nicholas party this year. Most of the babies were too young to realise what the fuss was about, but let’s hope this was the beginning of a new tradition.

Foreach had a good run between 2011 and 2014, which was recognised by our nomination by Deloitte as one of the 50 fastest growing tech companies in Belgium. 2015 confirmed our position as a reliable web development partner for a growing customer base. We expect strong growth in 2016, both in number of colleagues and customers as in revenue. We are starting a big recruitment campaign to support our ambitions for the new year. 2016 is the tenth anniversary of Foreach and realising another leap forward for the company would be an additional reason to celebrate. 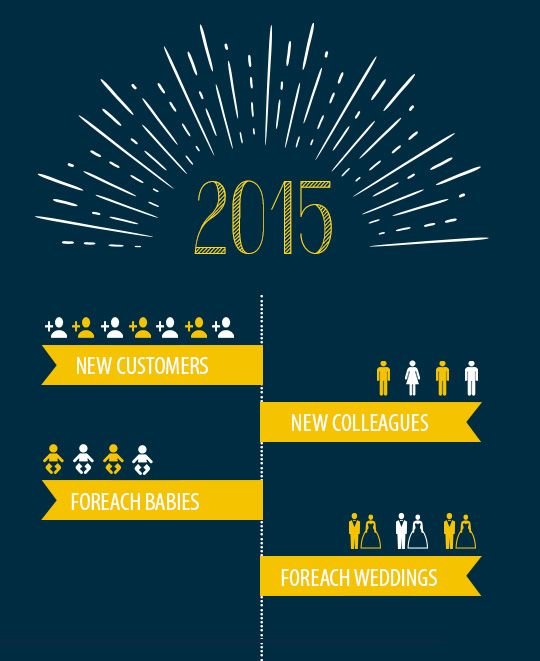