Deciding which Java framework to choose when documenting your REST APIs can be quite the hassle. In this blogpost we will briefly compare the three documentation frameworks for REST web services that we ourselves use, and how they integrate with the Spring framework (which is the Java framework most often used at Foreach). These are RESTful API Modeling Language (RAML), Swagger UI and Spring REST Docs.

RAML is a separate document that is kept alongside the project that you, as a developer, need to maintain manually. In the default RAML configuration, almost nothing is done automatically. However, with the plugin ecosystem that comes with it, it’s quite easy to extend RAML to behave the way you want it to.

This documentation framework’s ecosystem is very active, with plugins that enable various functionalities, such as:

The written documentation is converted from the RAML format to human readable text (or HTML) during an extra step defined in the build process.

In the past, RAML used to be our preferred documentation framework within Java, but now that we have discovered some of the alternatives, we have started using RAML less and less. Also, with RAML it is a bit harder to write complete documentation that is also user-friendly (since all documentation in RAML needs to be written manually). Furthermore, we had a general tendency to forget to update the documentation after making adjustments to the API. This is an issue that can be solved by using a framework in which most API changes are documented automatically rather than manually.

In contrast, Swagger UI generates everything automatically. In this framework, Swagger works in tandem with Swagger UI and Springfox to generate documentation at runtime. This framework consists of three components:

These three components look at your code to determine what needs to be documented; they generate both the documentation (via a dynamic website) and the possibility to do "test service calls" via the Swagger UI. The service calls work the same as, for example, Postman, the only difference being that this library can work in the browser by sending raw requests to the service from the documented part of your application.

Since Springfox will take care of the generation at runtime, there is no need to define extra build steps (unlike RAML and Spring REST Docs, in which a separate build step is necessary).

When we first started using it, the Swagger stack seemed to be awesome. We barely had any (manual) labour, because everything is generated automatically. At the same time, we were still able to adjust the documentation a bit by adding annotations to our code. In our opinion, this is a strength as well as a weakness. Because although Swagger UI is indeed easy to use, we did not have as much control over the generated documentation as we would have liked.

Spring REST Docs is a part of the Spring ecosphere that generates AsciiDoc snippets based on your unit tests. These snippets can be included in hand-written AsciiDoc to assemble documentation for your API.

To do this, you specify which fields you expect to retrieve from a call to a MockMVC-endpoint and you define where you want to create the generated snippets on your file system. If the expected fields do not precisely line up with the results, your tests will fail, which means that the documentation related unit tests also serve as an extra sanity check for your code.

Later in the build process you will need to define an extra step that generates a human-readable HTML file by combining the generated snippets with the hand-written index pages, thus facilitating the spread of the documentation.

We used Spring REST Docs in a project that required a combination of API and regular documentation for an external party. They were using their own test tools, so it was not desirable to provide them with a browser-based interface to test the interface. We picked the REST Docs framework because (a) it could also be a part of our integration tests and (b) we could easily combine it with all our other, non-technical, documentation. 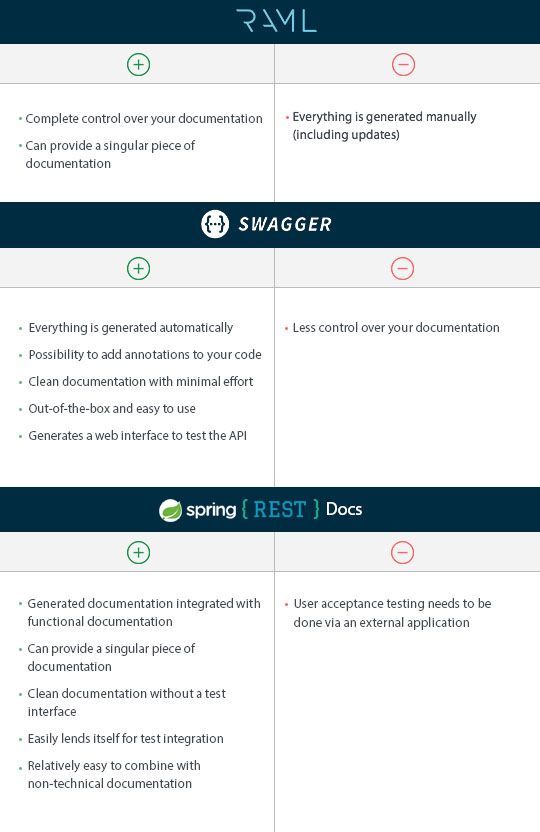 Whatever you choose, every single framework is sufficient to communicate the contract of the web service to other developers in an unambiguous manner - which is ultimately the goal of these frameworks.